After the birth of my second daughter, B, almost three years ago, I became a full time stay at home mom. My first daughter, S, was almost four and needed an outlet for her extra energy and creativity since she was no longer in daycare during the week. I signed her up for a ballet/tap/tumble class at the local dance studio. At first, I thought it was a good opportunity for S to socialize with kids her own age. I didn't expect to meet kids my age as well. It turned out, I was really missing adult interaction. Going from a five day work week to a seven day home week left me without break room gossip and friendly chit chat by the postage machine. It took a few dance classes for me to warm up to the other moms. I was the newbie to the group. They all knew each other from past classes. It turned out, I met some pretty fascinating women who also happened to be stay at home moms. This is also where I discovered the world of belly dancing... I'll save that for another blog.

I'm pretty sure I looked forward to dance day more than S did. Not only was I able to sit around and chat with other moms who understood my current situation, I was able to get down to one kid for an hour and know that S was having a good time. Most of the moms had a kid B's age, so the B was able to "socialize," too. A few weeks went by and the "play dates" began. My daughters and I would go to another mom's house and the two sets of kids would play and we moms would eat finger foods and sip juice from boxes. We would joke about slipping some alcohol in our apple juice or talk about our wild days before our offspring entered the picture. 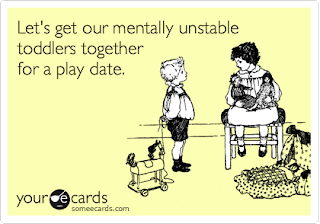 Nearing the end of the dance class season that spring, I wanted to seal the deal with my new group of mommy friends and earn a permanent spot in the clique. I was afraid that once class was over, we would lose touch without the weekly reminders of our existence. I decided I was going to host a play date at my house. I've never hosted one before, but I pride myself on hosting lavish parties for our adult friends. I figured I could host a pretty killer play date, too. I gave myself a week to prep for "The Best Play Date Ever Extravaganza." I invited all the moms and their kids from the dance class to my house. I cleaned every room in the house and put the nice candles in the candle warmers. I devised a beautiful Mediterranean inspired lunch spread complete with a large pitcher of sangria.* I woke up very early the day of the play date and gave the girls baths. I even showered and dried my hair. I take hosting events very seriously.

I thought my play date went very well. My mommy friends had a wonderful time sitting around the kitchen table, sipping their sangria and dipping fresh veggies into hummus. We laughed and tried to one-up each other with our crazy pre-kid life stories. I remember looking around at the moms and noticing how relaxed they were. The little children were napping in their mothers' arms while the older kids were running around and giggling in the living room. Everyone was happy and we all promised to make this a part of our monthly routine. It was perfect. One by one, the moms collected their exhausted yet happy kids and went home. I started clearing the kitchen table and snacked on the fruit at the bottom of the sangria pitcher. It wasn't until I walked out of the kitchen, that I realized I committed the ultimate rookie error of Play Dates 101. I forgot that I invited a big group of kids into my house.

Merriam-Webster defines play date as a play session for small children arranged in advance by their parents. Sounds simple, doesn't it? Just picture it: a bunch of moms sitting around with cups of tea and cucumber sandwiches catching each other up on current events or neighborhood gossip, while the tots quietly entertain themselves. Wouldn't that be nice? Dream on, sister. No matter what we say, play dates are not for the children. Play dates are for the moms. Moms plan play dates with the intention to distract their lovely children for an hour or two so they communicate with other adults... adults who are potty trained, eat without assistance, can share with others and won't pull another adult's ponytail. Unfortunately, most play dates I've attended involved resolving arguments between little girls about who gets to wear the Cinderrella dress and who can be the mommy when playing house. The moms are goalies, kicking the kids back into the playroom so we can finish comparing birth stories and where one can find the best deals on diapers. No matter how much I pleaded with S to play nicely with the other kids and reminded her that these kids are, in fact, her friends, my meaningful conversations about potty training would be interrupted because of playroom disagreements. I should have known something was wrong when my play date was fight-free.

My house was wrecked. It looked like a bomb went off. Play clothes, naked Barbies, crayons, stickers, puzzle pieces, along with other small toys, were thrown all over the floor in multiple rooms. One child had discovered the candle warmer I had so foolishly placed on a low shelf and drizzled wax all over the carpet and couch. There I was, tipsy off of sangria fruit, staring at the biggest mess I have ever seen. Then my husband walked through the door. I liken that moment to the moment when a teenager realizes exactly how much destruction was caused by her just-a-few-friends-over-for-pizza-turned-house-party as her parents walk through the door from their vacation a day early.

I learned a lot that day. I learned that it is pointless to clean your house if you invite other kids over. I learned that you can't take your eyes off of not only your kids, but the other kids, even for a second. Apple slices and juice boxes are totally acceptable sustenance for moms and kids alike. Showers are optional and probably best saved for after the play date. If the kids are not arguing, it's probably because they are building a toy bomb in the next room. Kids don't argue when they are conspiring against you. No matter how neat and organized the kids are with their toys in their home, they will not be neat and organized in your home. I learned you can get a good buzz from eating fruit soaked in wine.

It was completely and totally my fault for the destruction of my home. I had no idea what I was doing. I wanted to be the coolest mom in the group. I thought I could handle it all. I was naive and believed that I could embody the cool mom image with the stay at home mom stereotype. I knew we didn't eat bon-bons and vacuumed in heels while our tidy little angels played sweetly on the floor but, for some crazy reason, I wanted to convince the other moms that I did. I insisted that the other moms relaxed and enjoy themselves while I played a hip June Cleaver. I tried so hard to be June Cleaver that even if I was aware of the mess before any of the moms left, I would have never allowed them to help clean up. My party, my mess!

I was able to clean up that evening after my buzz wore off. In case you are wondering, you can remove wax from carpet and upholstery by running a warm iron over a brown paper bag covering the spot. I've been to and have had few play dates since then but I resolved never to host a "The Best Play Date Ever Extravaganza" again. It's just too much work. Besides, my mommy friends like me because I'm like them... just some moms who need some good company and assurance that they'll be fine. However, I'm pretty sure I did host the best play date ever, so in that aspect, I won.

And sangria is reserved for girls nights out.


Posted by Terese Lavallee at 4:43 PM

Labels: Happy Homemaker, How to be the Perfect Mommy, Sangria

All the fine people stopping by:

Where do they come from?